The name of the game today was TRACING - Day 2.

Today's workshop was the second held in 2015.  We continued last week's workshop theme as we started TRACING - Day 2.  Today we showed what the training curve is all about, and traced 649 toys on 2" material, and 60 critters on 1" material.  After today's efforts, we will need to trace about 250 more vehicles/toys on 2 inch and 1 inch material for 2015.  This means that as of today, we have traced about 2/3 of the traceable toys needed for the year.

This has been the easy part.  After this, the fun will really begin.

Today our hearts go out to the family of Larry Borg.  Larry (the retired Veterinarian) was making wheels for locomotives up until about ten days ago.  He had been diagnosed with Leukemia back in Dec 2013.  He and Barb battled for over a year with month long treatment/trips to the Mayo Clinic in Rochester, MN.  Larry put up a heroic fight, but the disease was relentless, and Larry passed away on Jan 29th, 2015.  We'll miss you Larry.  In lieu of flowers, a memorial for Dr. Larry Borg has been established for Leukemia Research at the Mayo Clinic in Rochester, c/o Mayo Clinic, Department of Development, 200 First St. SW, Rochester, MN 55905 (please write Leukemia Research in memory of Dr. Larry A. Borg on the memo line) or you can donate online at philanthropy.mayoclinic.org/donate.  Dr. Borg’s online guestbook is available for friends and family to sign at osheimschmidt.com.

sdguildrcwa2
the end
Posted by RCWA at 7:25 PM 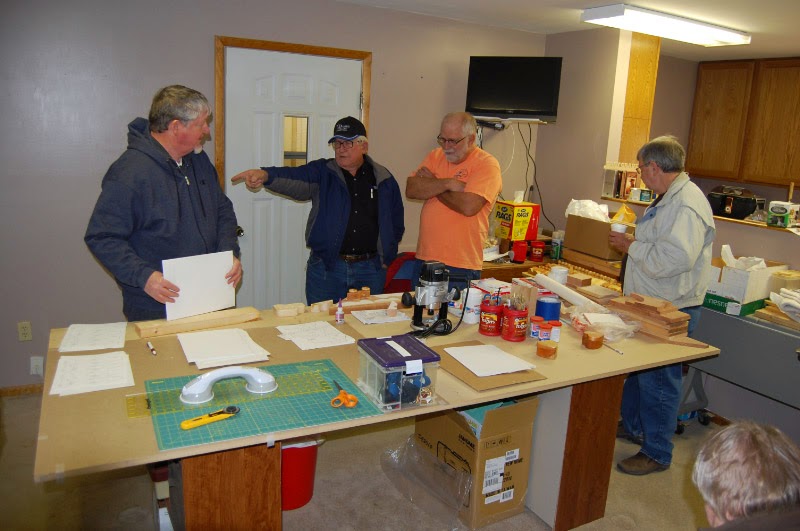 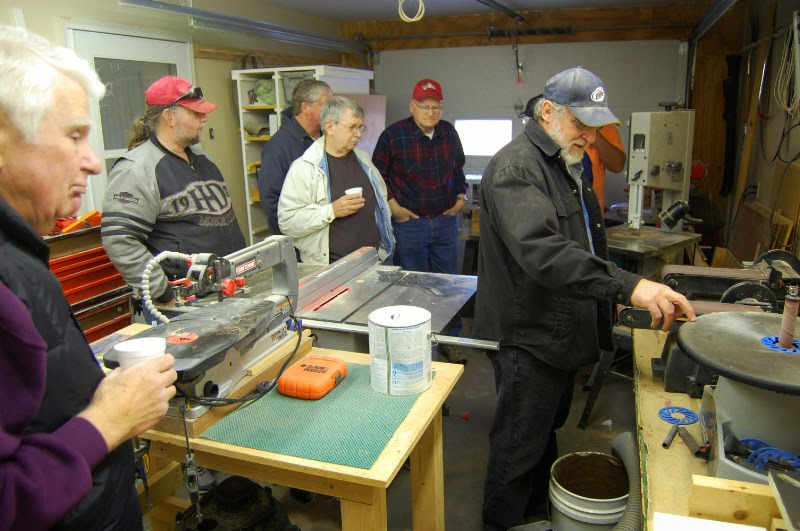 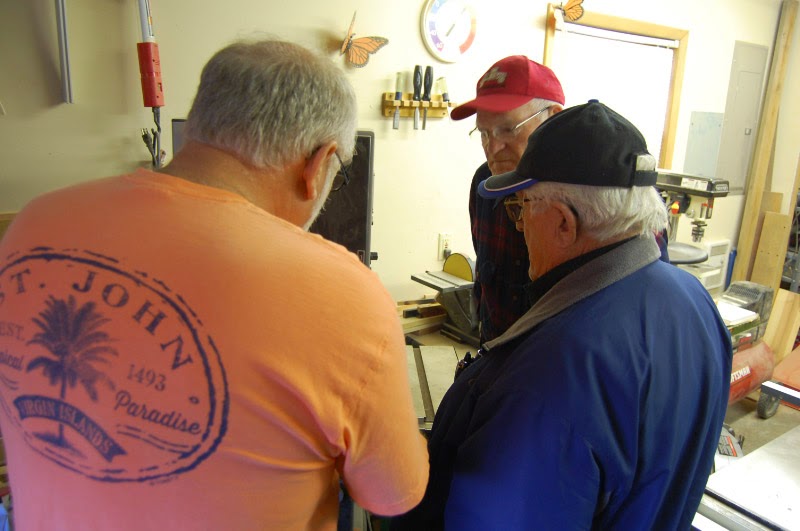 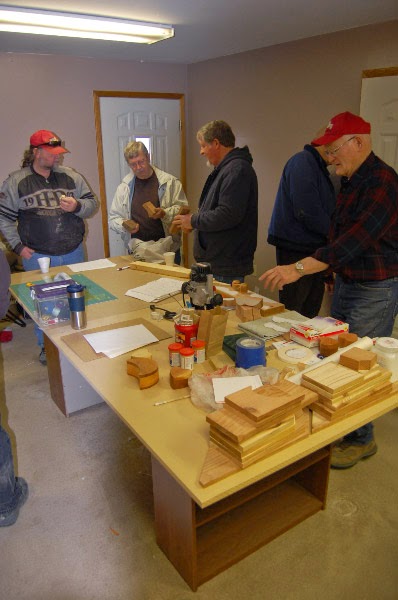 sdguildrcwa2
the end
Posted by RCWA at 2:38 PM

Today's workshop was the first for 2015.  As per usual, the name of the game today was TRACING - Day 1.  We sharpened our pencils and tracing skills and traced 588 toys on 2" material, and 210 critters on 1" material.  This number is one third of the traceable toys needed for the year.

Of course, before this workshop could take place, some behind-the-scenes activities took place.  Bob planned out the strategy for attacking the large number of variety of toys to be made.   Julian visited Dakota Kraft on three occasions to bring home scrap 2x4 stock and 2x6 stock.  Julian then unloaded the wood into his shop and planed 2 sides to reduce the amount of sanding needed as the toy is completed. He then loaded it back into his vehicle and brought it to the workshop.  Rollie located several boxes that would be needed to transport the blanks to and from the Club for Boys Shop for further efforts at individual shops around the Black Hills.

After the toys were traced, they were cut into individual blanks, sorted, and boxed up for the next step in the process. One of the next steps is to drill holes for windows, so some members began that process as well.  Rollie Lynde took home of Batman cars to start cutting on the bandsaw and scrollsaw.  Grant Coffin brought home a box of toy buses to drill out the windows.

Grant Coffin noticed that the patterns were easier to trace if they had a few strips of sandpaper on the back of the patterns, so this was done to increase accuracy and productivity on the tracing effort.  Good eye and nice job Grant! 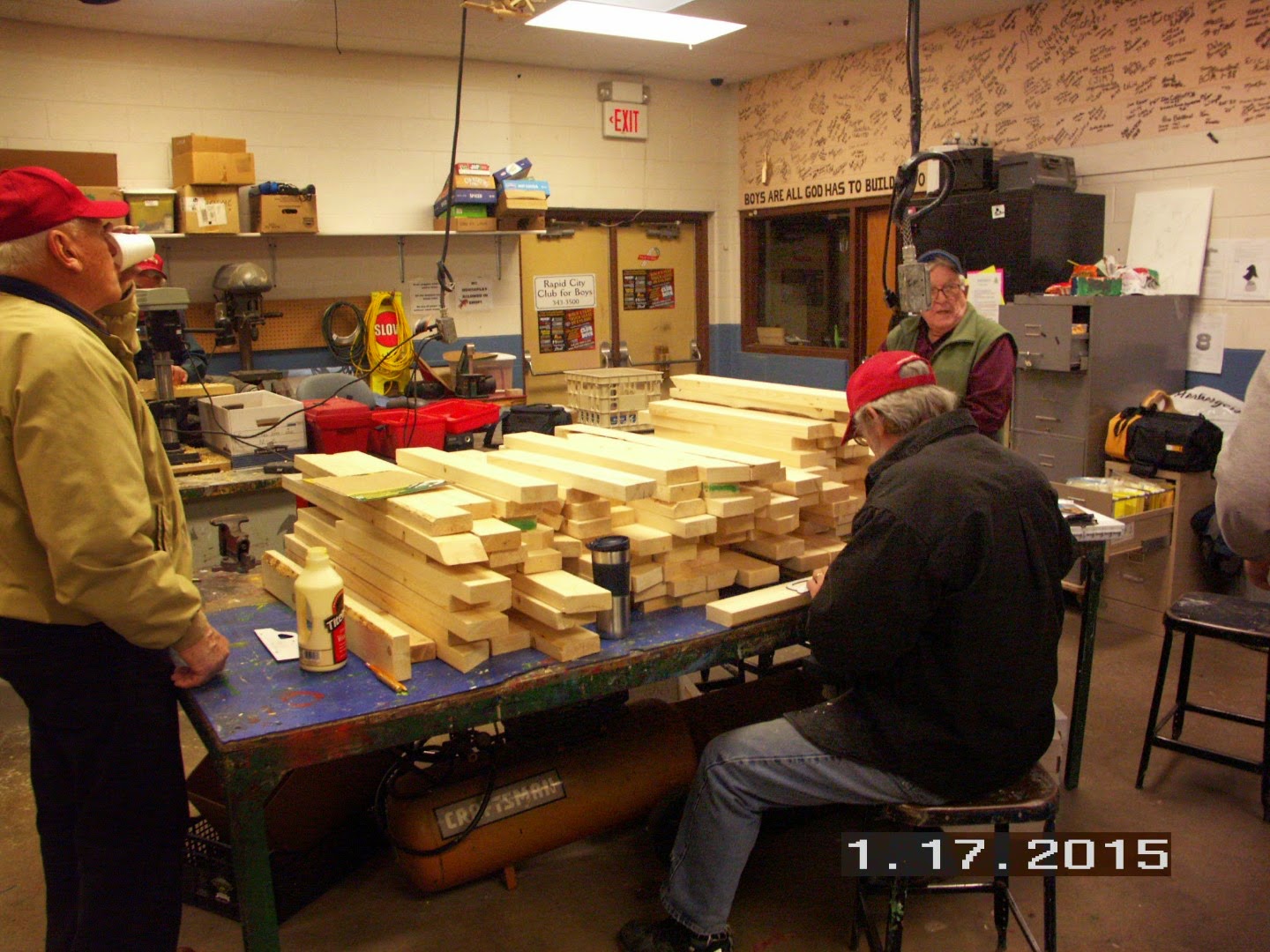 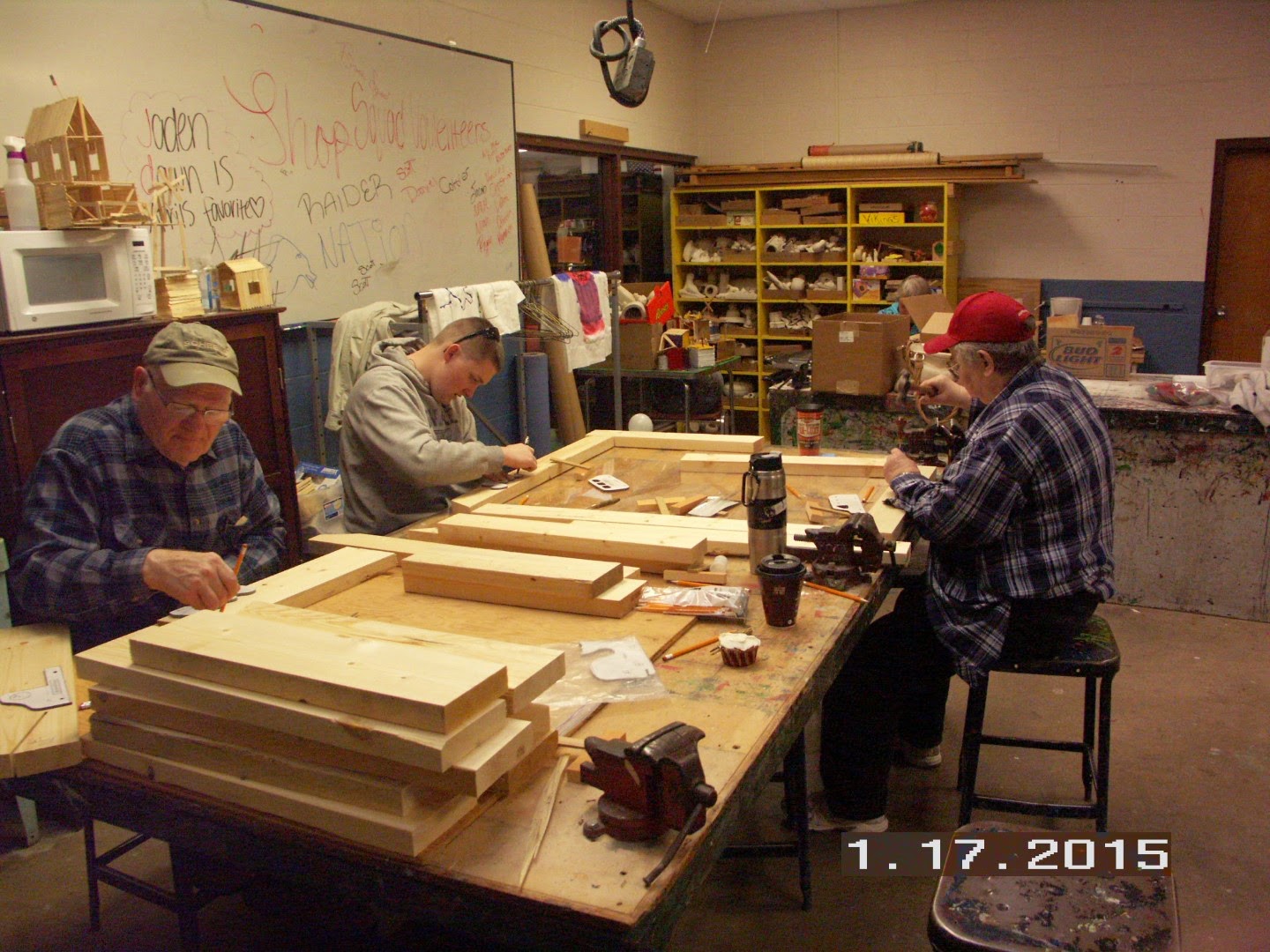 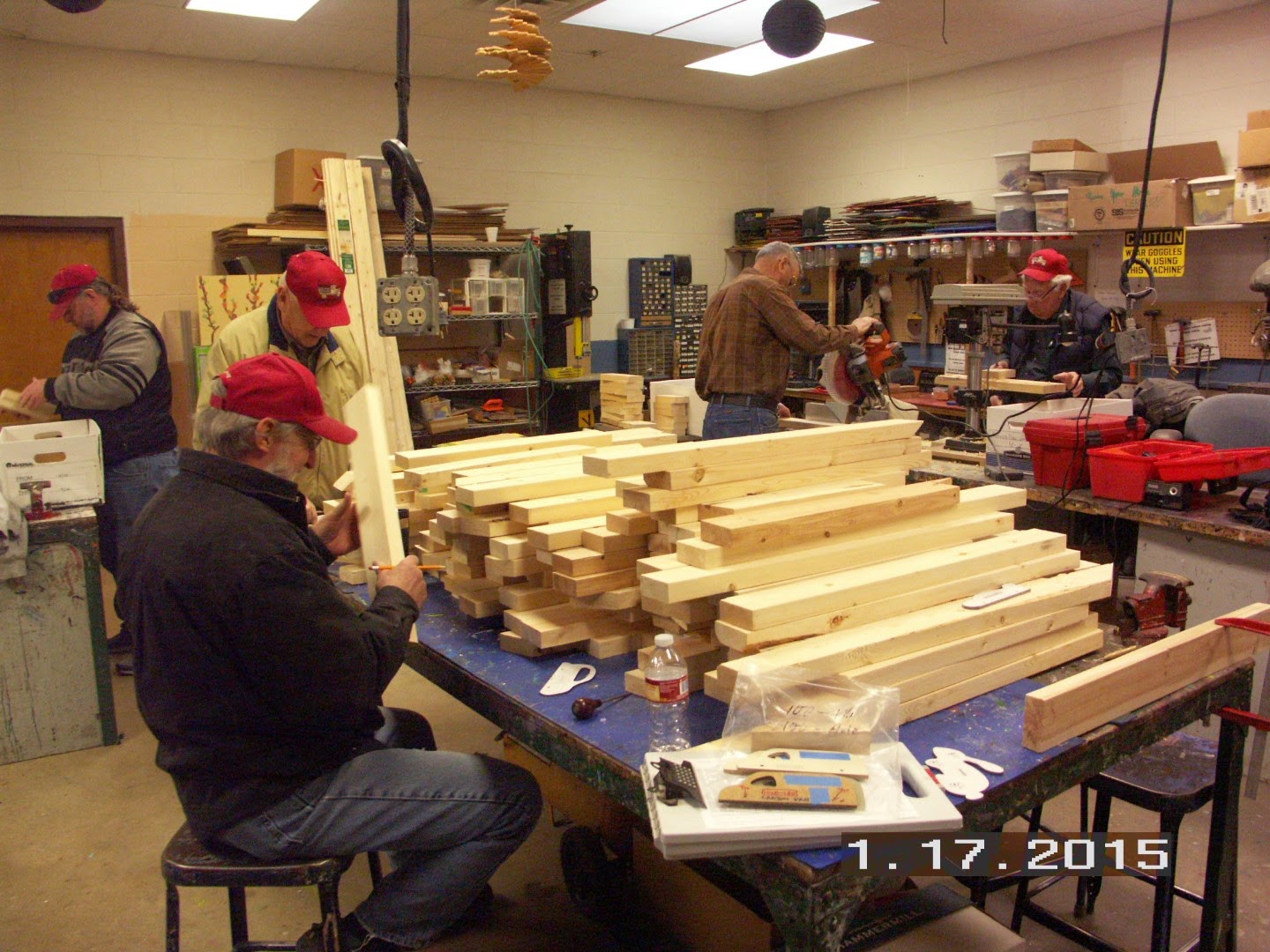 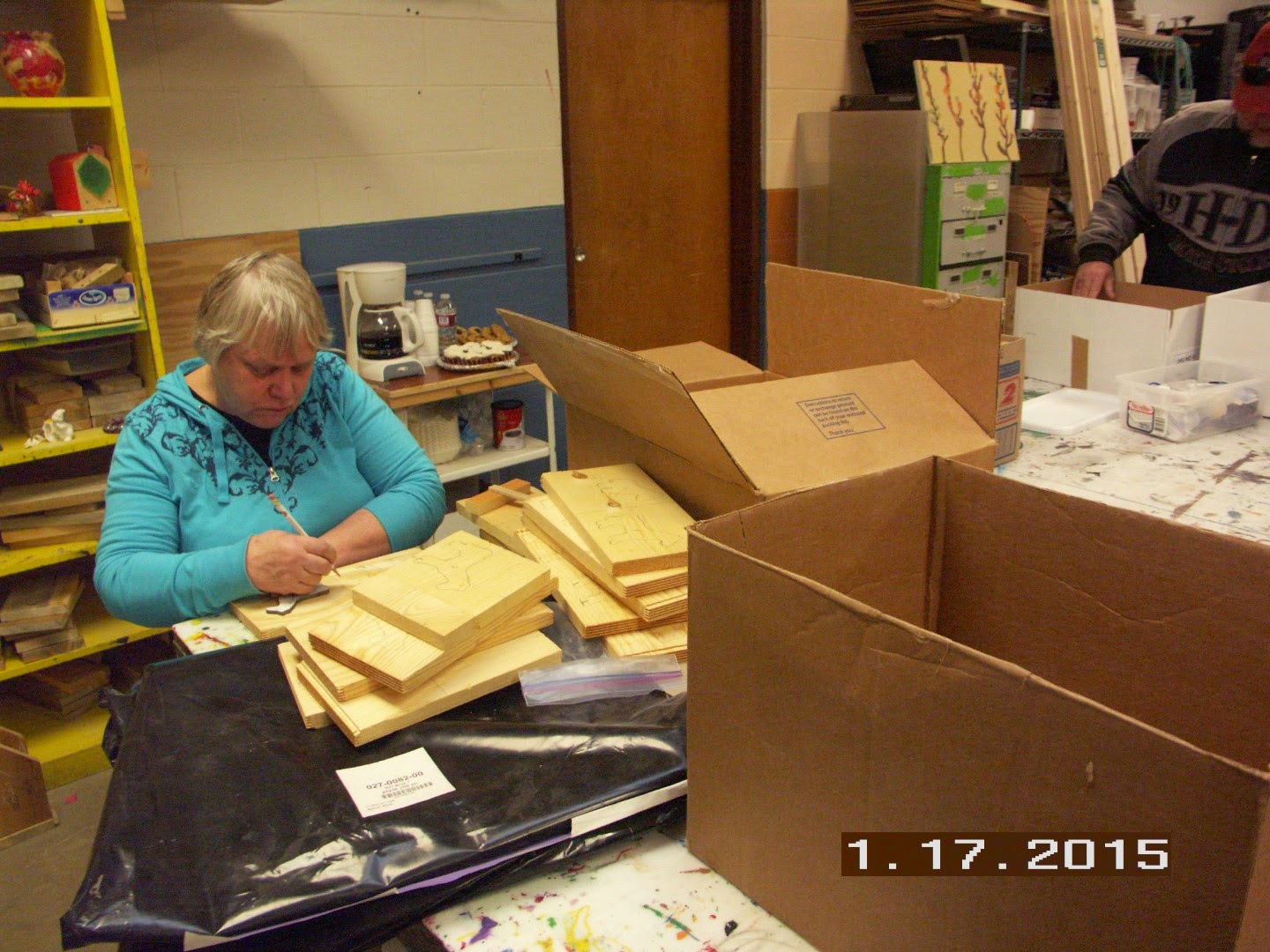 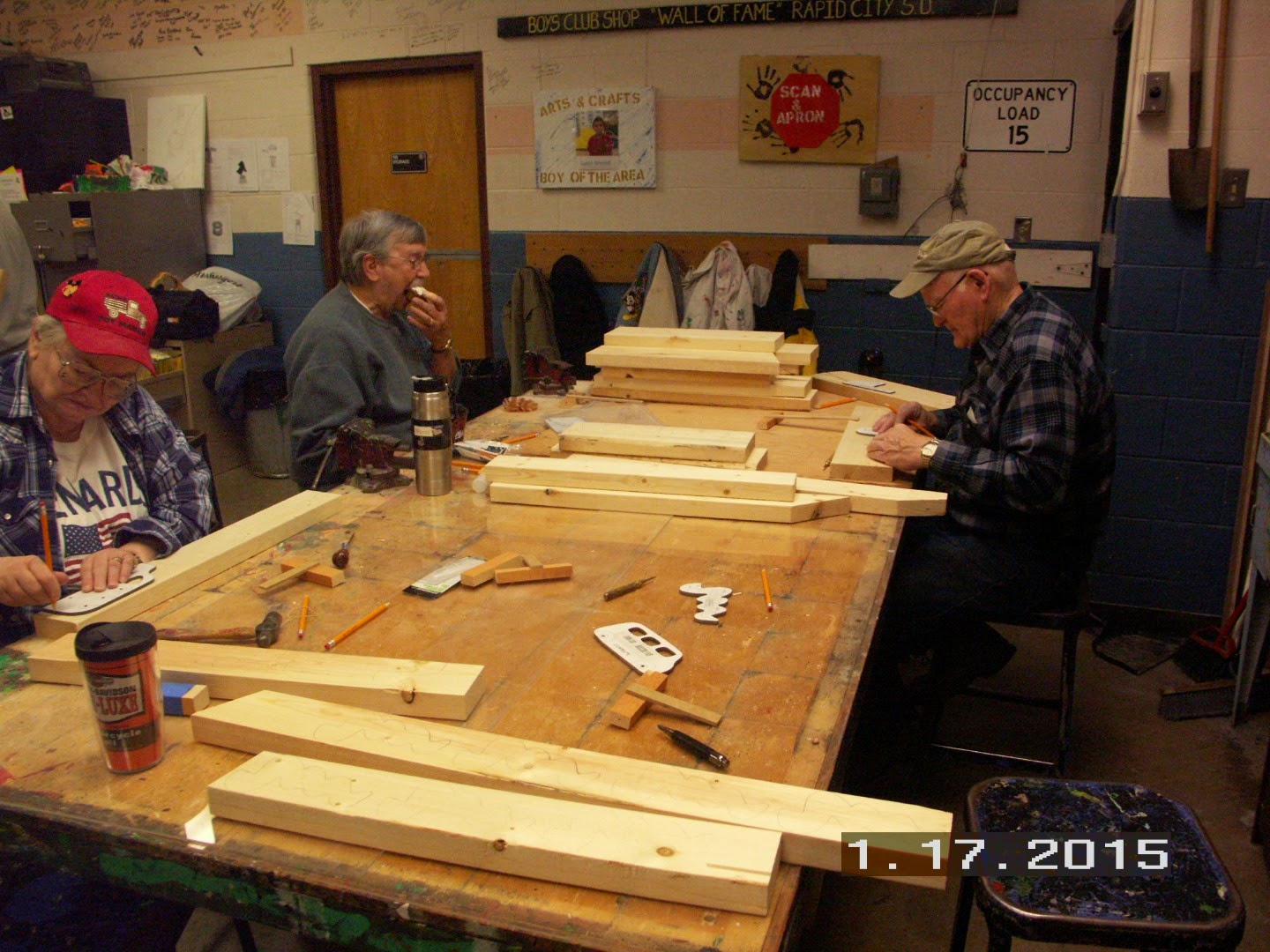 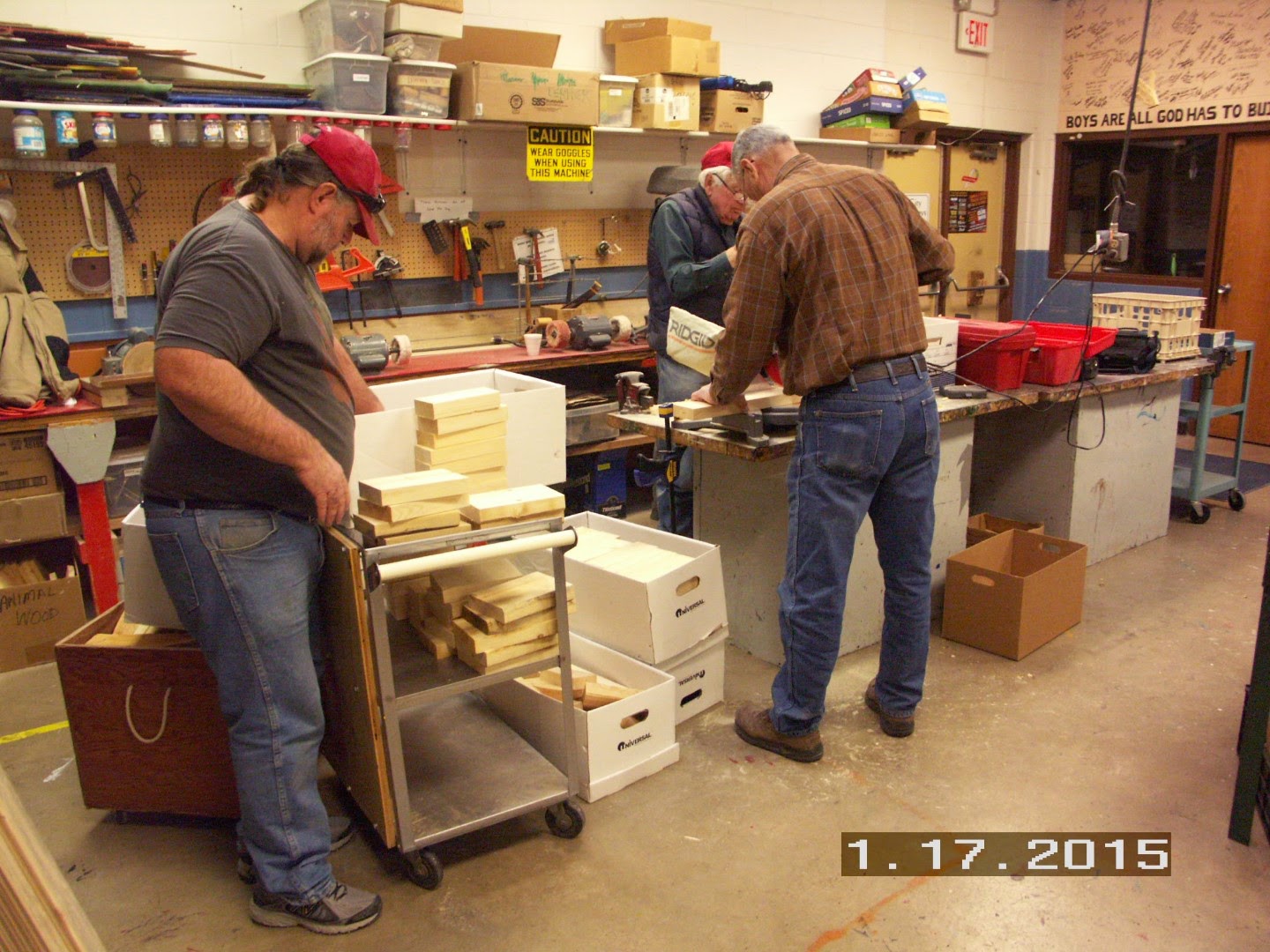 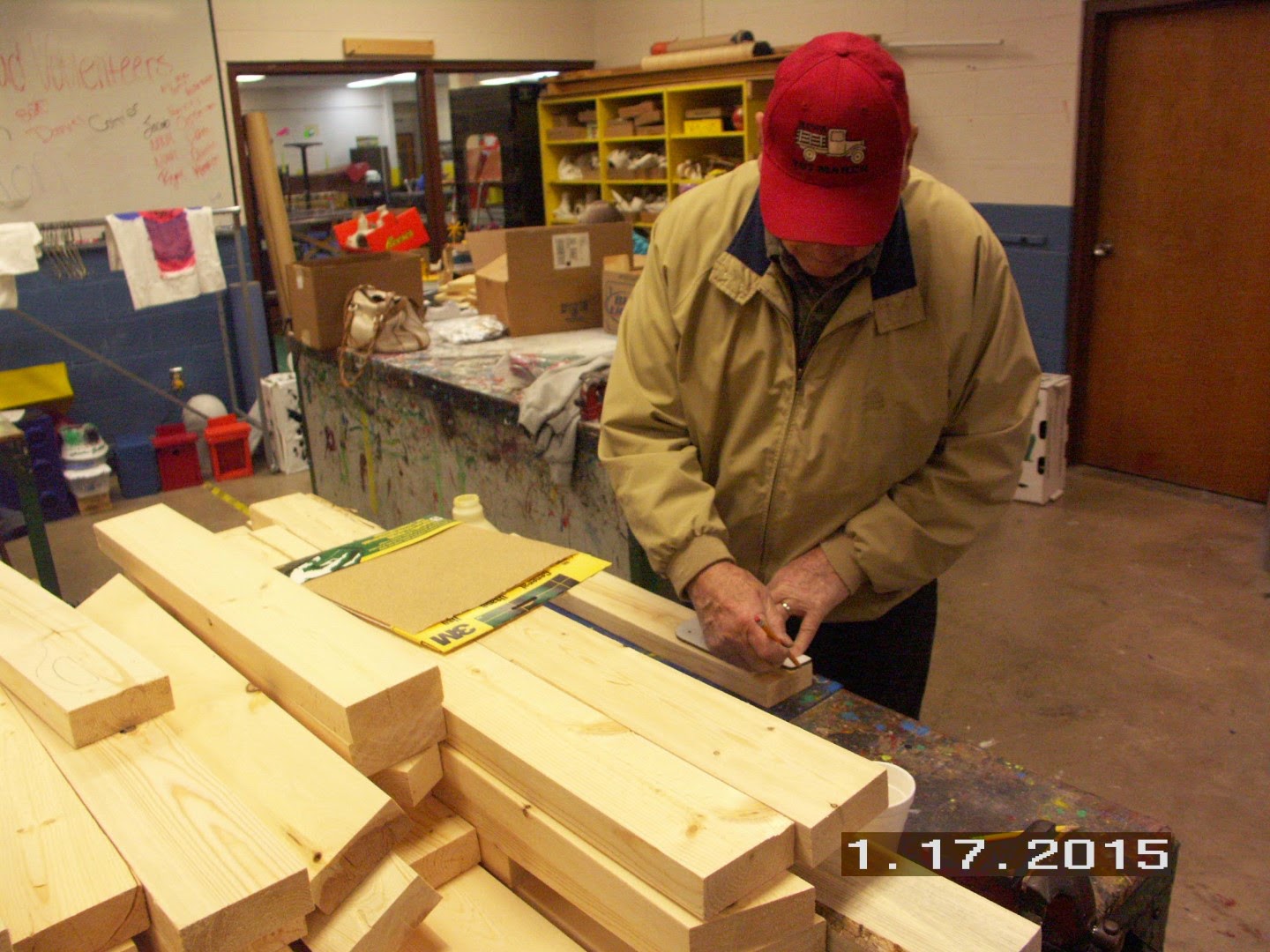 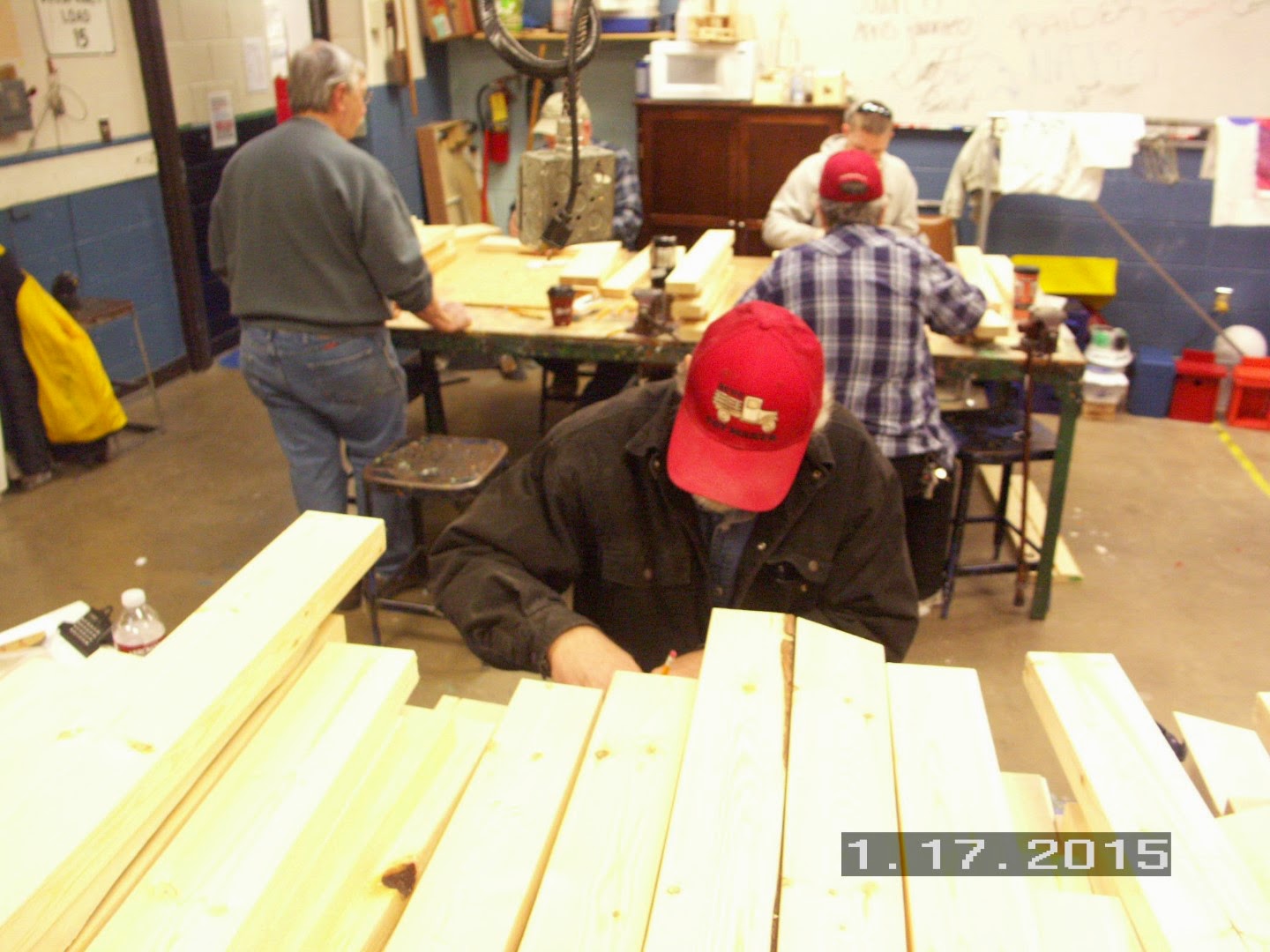 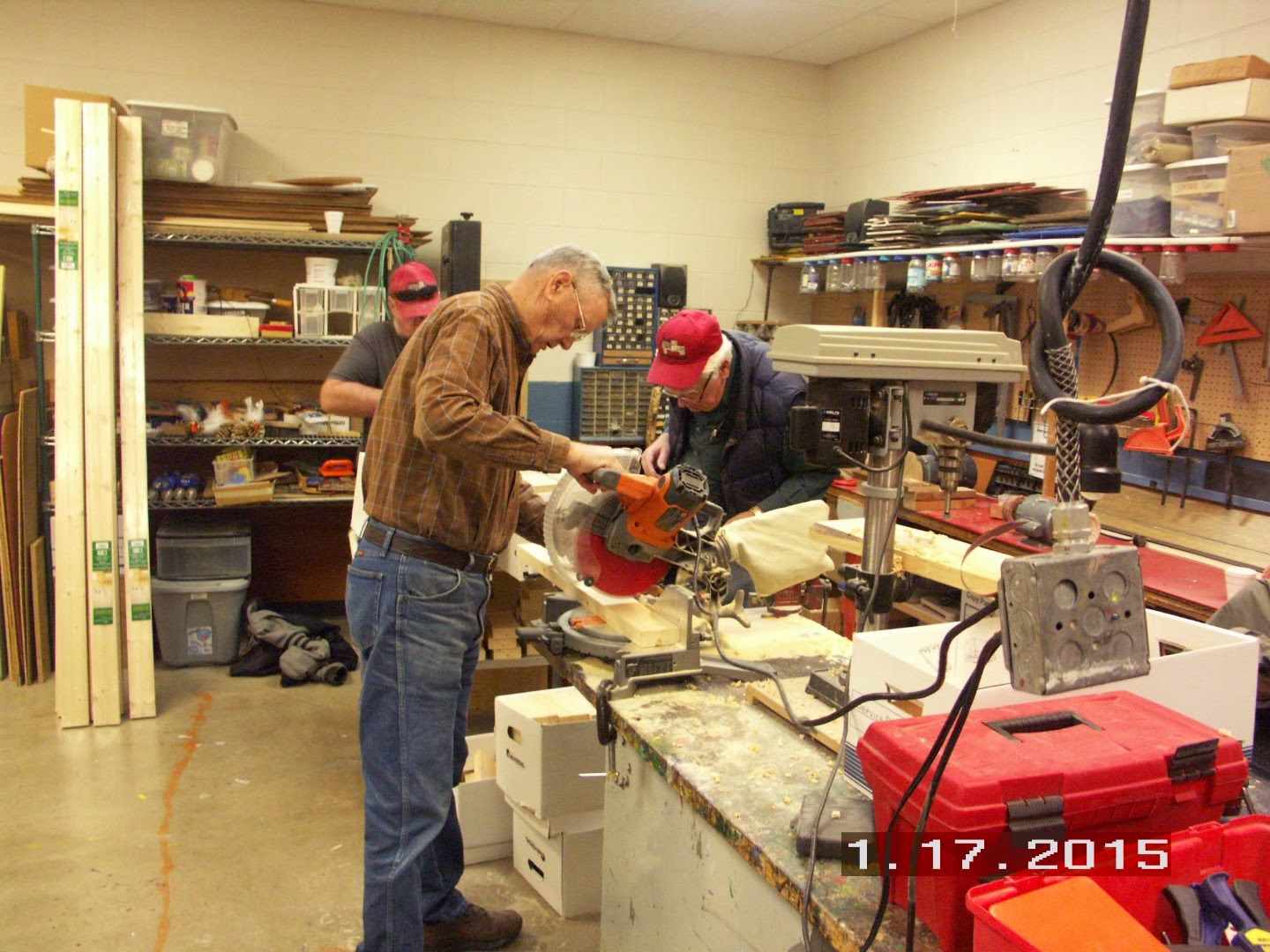 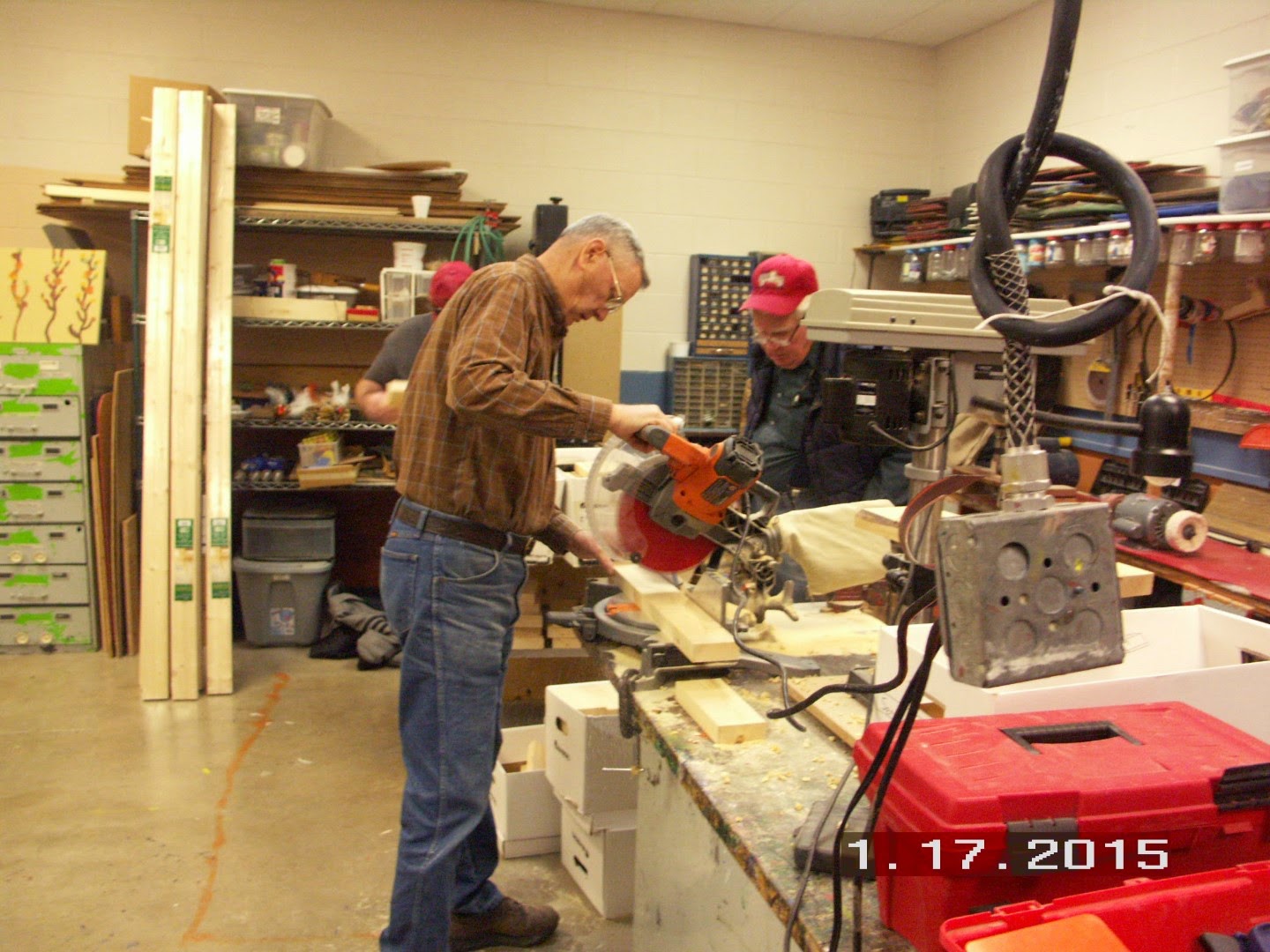 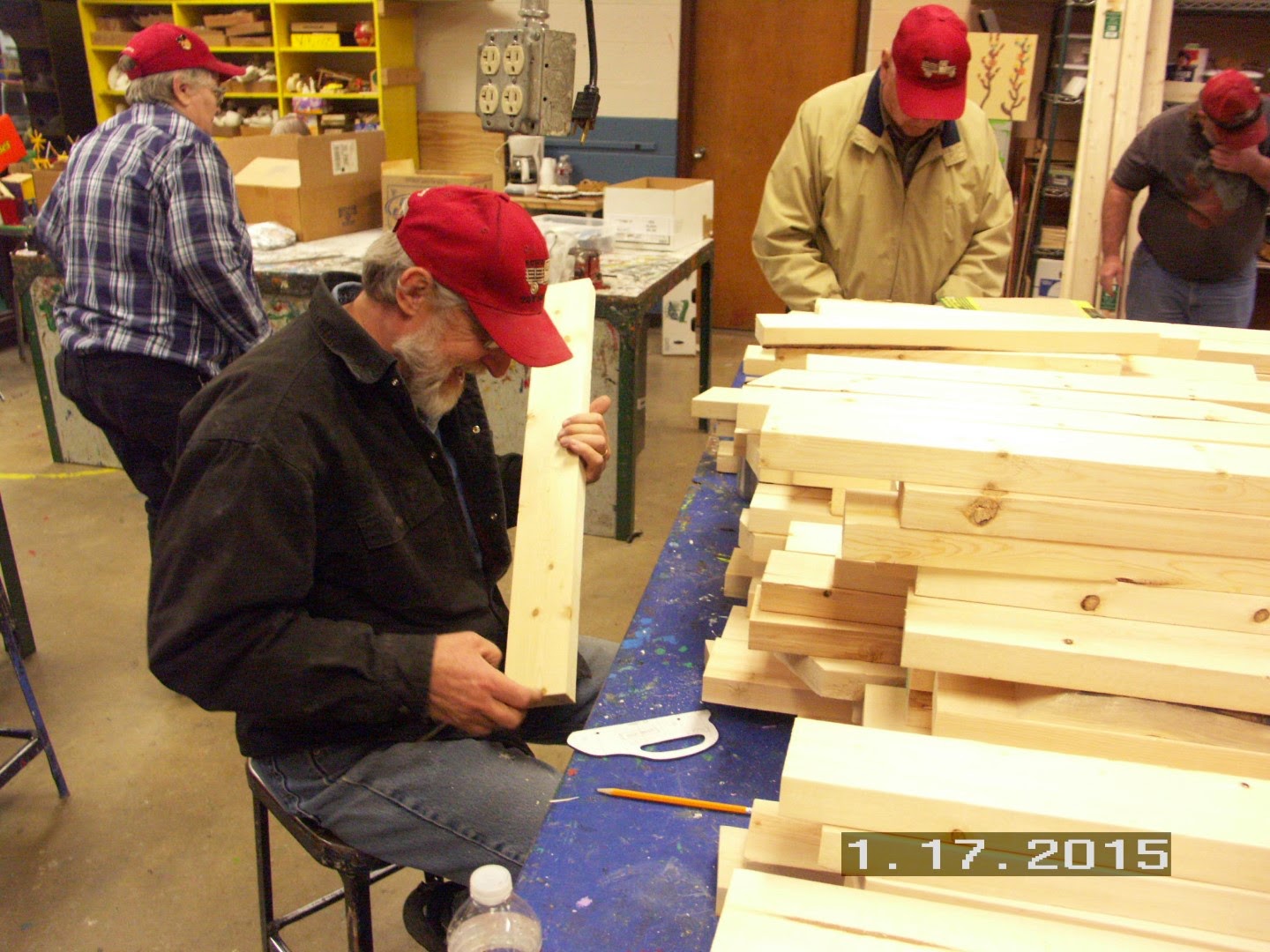 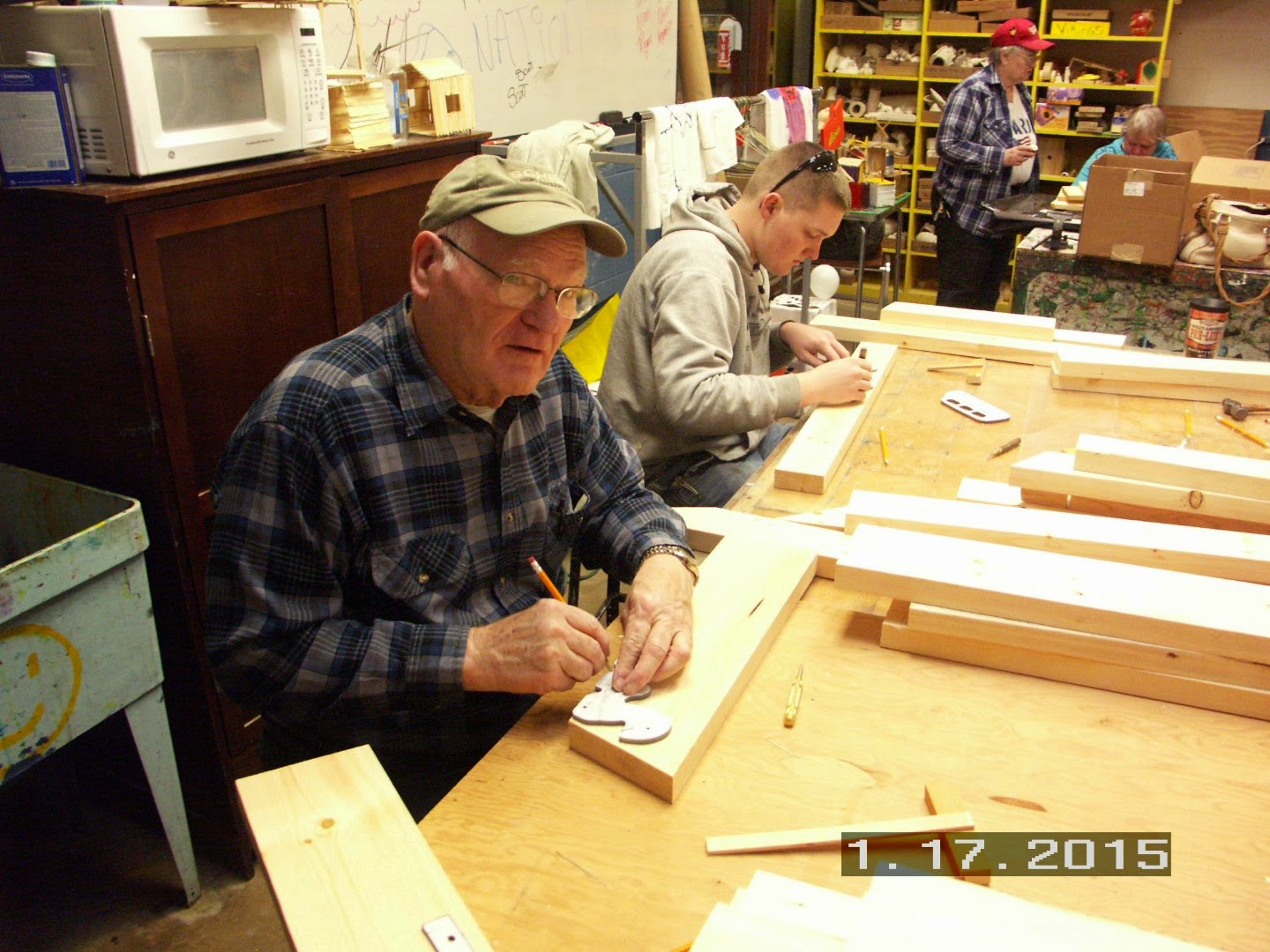 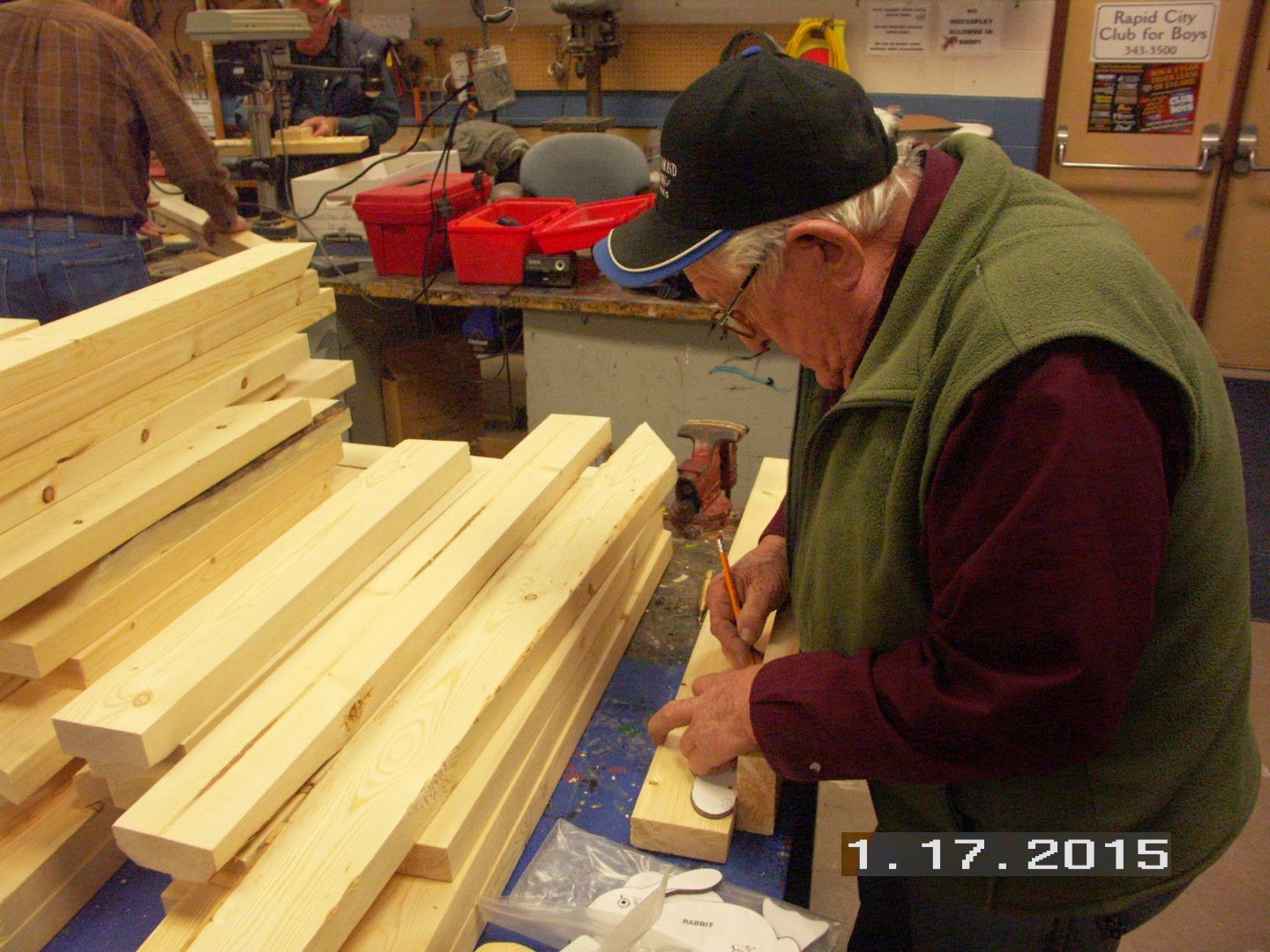 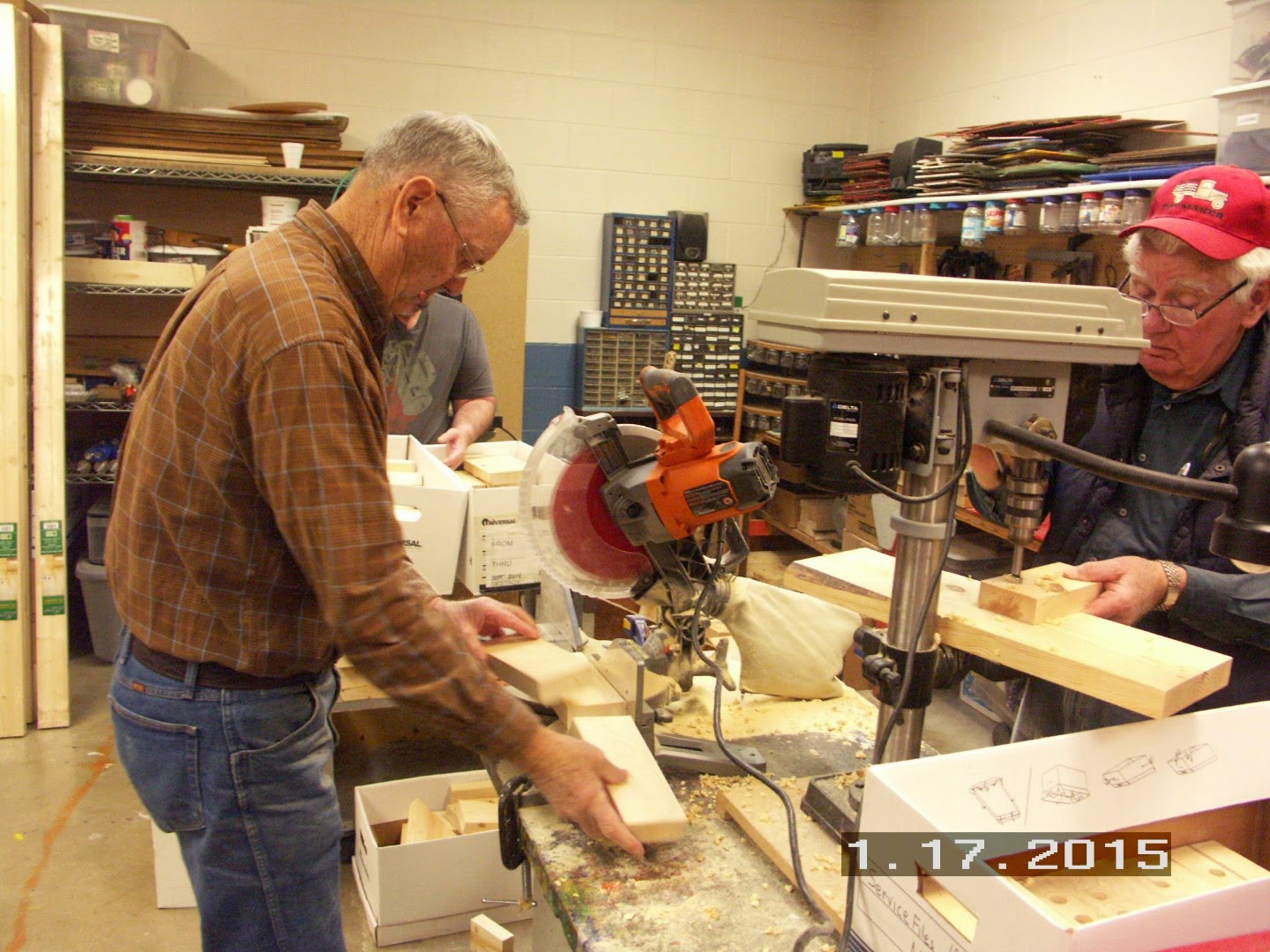 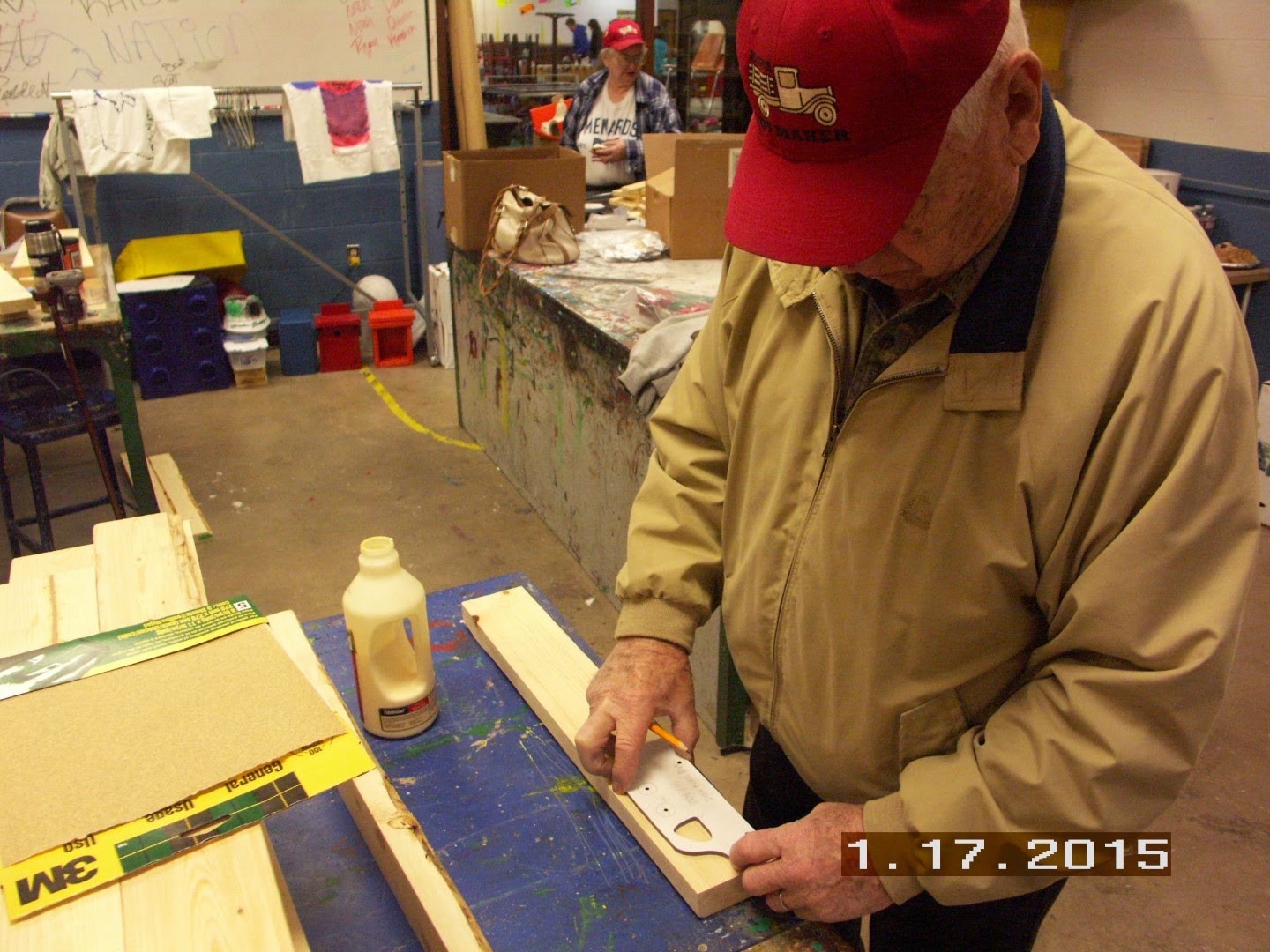 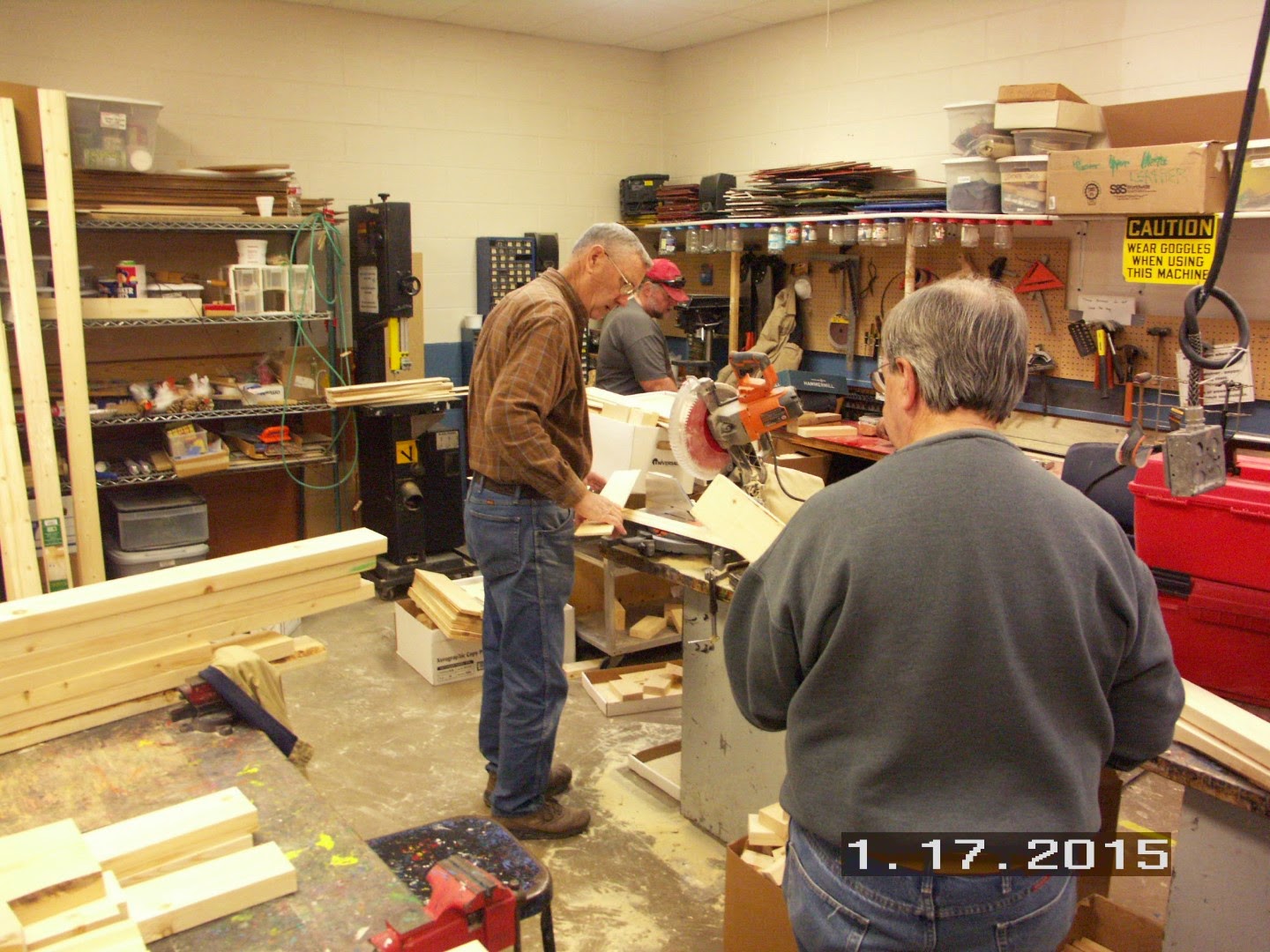 During the Workshop, Lon Gose assisted personnel working on some upgrades to the front showcases of the Club For Boys building by cutting a large number of wainscot paneling with his miter saw.

sdguildrcwa2
the end
Posted by RCWA at 4:20 PM

The January Meeting of the Rapid City Woodworkers Association was held on Monday Jan 12, 2015.